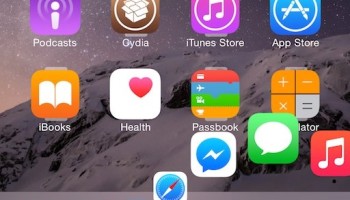 If you’re looking to give the Home screen dock on your iPhone a fresh new look, you’d probably be interested in a new jailbreak tweak known as Harbor that changes the way you interact with the apps on the dock.

The tweak brings OS X-style dock to iOS 8 devices that functions in the same way as Yosemite’s dock on Mac. It lets you add an unlimited number of applications to the dock without hiding them, allowing you to view all of them at once. The tweak achieves this by making the app icons and the dock smaller as you add applications to it.

But that is not all. You can scroll through each app by placing your finger on the dock and sliding across the app icons. As you do so, you’ll notice an animation effect similar to the one seen in Yosemite. While you’re sliding your finger across the dock, if you release it on a particular application, it will be launched right away.

The applications that are running in the background will have a black state dot underneath them indicating that they are active. On the other hand, if an app has a pending notification, it will start to bounce on the dock every once in a while.  Along with portrait orientation, the tweak supports landscape mode as well.

Once you install Harbor, you can configure it from its preferences pane in the Settings app. There, you’ll find a kill switch toggle to enable or disable the tweak and several sliders that allows you to adjust the animation duration, dock margin as well as the wave height and width when you’re sliding your finger across the apps in the dock.

You can also choose how often you want the apps with a pending notification to bounce on the Lock screen, Home screen or inside an app, show the app name when zoomed in as well as the black indicator dot under a running app.

All in all, Harbor closely resembles OS-X Yosemite’s dock and functions in the same way. All the features of the tweak work perfectly and if you’ve been looking for a way to experience Yosemite’s dock on iOS devices, look no further than Harbor.

Harbor can be purchased for $2.99 on Cydia’s BigBoss repository and it supports iOS 8 devices only.

Stay Tuned With Us OnFacebook AndTwitter
Or Subscribe To iphonefunsite By Email
Give Us Thanks By Like And Retweet
Tags:  2015, best, brings, dock, harbor, ios8, JB, tweaks