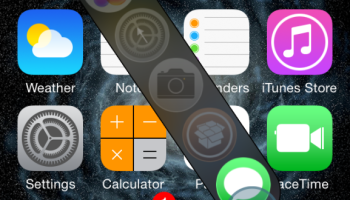 AppButton is an awesome new jailbreak tweak by iOS developer Steven Rolfe that makes it a lot easier to multitask on your iPhone by bringing a new way to access the app switcher.

The tweak adds a translucent circular button on the screen which allows you to switch between apps in the app switcher. When you tap on the button and drag it across the screen, it will display a tray of all the apps that are running in the background. If all the apps don’t fit in the tray, you can drag it further to the end of the screen and it will start to scroll through the remaining apps. To open an app, all you have to do is to drag your finger onto it and release it, to launch the app.

You can also move the button around the screen by tapping and holding on it for a small period of time and then moving it around. The also makes it a lot easier to switch between the currently open and the last open app. All you have to do is to tap on the button once and it will switch to the previously open app.

Once you install AppButton, you can configure it and customize the button from its preferences pane in the stock Settings app. The pane is divided into three sections; Favorite Apps, Look and Feel, Behavior.

The favorite apps pane is self explanatory. You can select the apps that are always displayed in AppButton’s tray. These favorite apps can be accessed by tapping and swiping AppButton upwards.

The look and feel section allows you to customize the look of the button by adjusting its transparency, button color, tray color and more.

The behavior section is where you’ll find the more important configurations such as swapping the controls so that the tray will be opened only when you tap and hold on the button instead of a single tap. You can also assign an Activator gesture to hide or unhide AppButton, choose what happens when you tap or double tap on the button such as switch to the last open app, go to the Home screen or open the original App Switcher.

AppButton is unique and interesting tweak that provides a quick access to the App Switcher. Along with this, you can also transform it into a virtual Home button as well as use it to close all background apps at once.

If you want to give it a try, AppButton is available on Cydia’s BigBoss repository for $1.49.

Stay Tuned With Us OnFacebook AndTwitter
Or Subscribe To iphonefunsite By Email
Give Us Thanks By Like And Retweet
Tags:  appbuton, Cydia, ios8, JB, tweaks